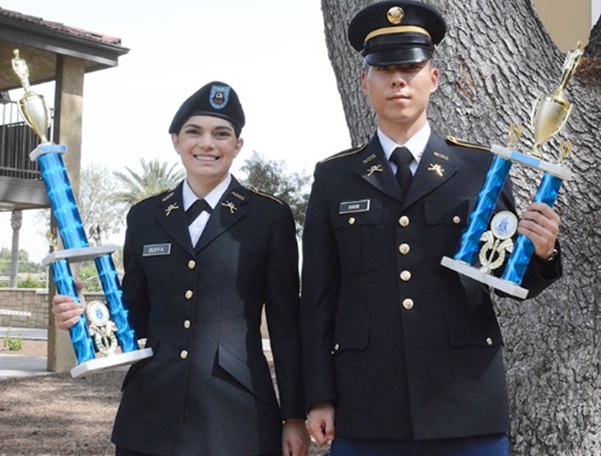 Riverside, Calif. (April 8, 2019) – Laura Elizabeth Buffa, a biology junior and captain of her ROTC team at California Baptist University, felt the nerves coursing through her body. She was about to lead her color guard team into a competition it had been training for all semester. Before the team routine started, she paused to say a prayer.

“God help me through this, I invite you into this competition,” Buffa prayed. “After that prayer, I was like, ‘all right it’s game time, and it's you and me, God.’”

Buffa proceeded to lead her squad, the only all-female ROTC team, through more than 40 commands over the course of a 7-minute color guard routine.

“After their routine, I told them they did an excellent job, and they deserved the victory,” Hahn said.

Buffa noted that the men’s team critiques, during training, helped motivate her team to improve.

“Their critiques are what drove us to do better. I have a lot of gratitude for them,” Buffa said.

Hahn said that ROTC cadets at CBU have a very positive and professional attitude.

“Our cadets respect each other and respect the flags that we carry,” Hahn said. “This has reflected well on CBU. Other cadets know who we are and what we are about.”

Pershing Rifles is an ROTC related national organization that was started by Lt. John J. Pershing in 1894 when he was the professor of military science at the University of Nebraska. Pershing Rifles drill teams compete in several categories, including squad regulation drill, platoon exhibition drill, individual drill and color guard.