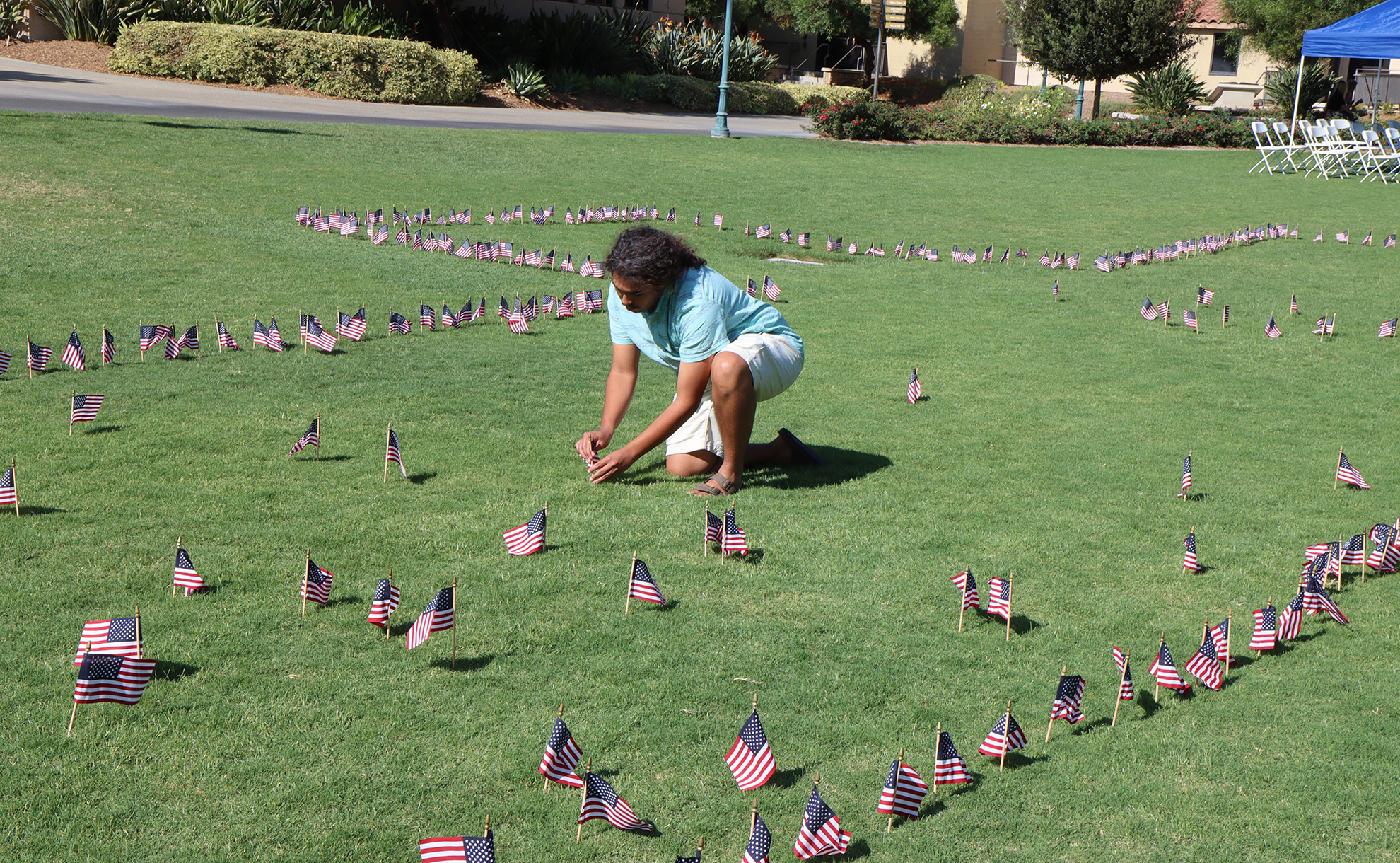 The Associated Students of CBU offered an opportunity to remember and honor the 2,977 people who lost their lives. At the Stamps Courtyard, students, faculty and staff could take one of 2,977 flags, one for each victim, and place the flag in the lawn, which was outlined as a cross.

“ASCBU and fellow Lancers are paying tribute to those who lost their lives in the events that took place 20 years ago at the World Trade Center [and the Pentagon], as well as honoring those who survived,” said Justice Avendano, a graphic design senior and ASCBU vice president. "Our generation barely recalls the events that took place on that tragic day. Remembering those affected connects us with our nation and promotes unity on our campus."

Jenna Dickstein, a liberal studies sophomore, took time to plant a flag. She was born a month after 9/11, however, she has cousins who lived in New York and her dad was traveling that day and was stuck in North Carolina when flights shut down.

“Every 9/11 I really feel compelled to make sure everyone is aware of how tragic that day was and how many lives we really did lose,” Dickstein said.

She said she would encourage other students to watch documentaries if they need to inform themselves about the event.

“It is such a monumental date in our history, and I don't want it to ever be forgotten,” Dickstein said.

Dr. Chris McHorney, chair of the department of history and government, said that even as years go by, it is important to remember the attacks because their effects are still being felt.

“In addition, our lives changed dramatically, with the consequences ranging from increased inconveniences when traveling, to the invasions of Afghanistan in 2001 and Iraq in 2003. The military has paid a heavy price in both wars, with thousands making the ultimate sacrifice and countless more returning home with significant visible and unseen injuries,” McHorney said.

Damian De Casas, a biology senior, remembers his elementary teacher turning on the TV and his parents trying to explain it when he got home from school. He stopped to plant a flag to remember 9/11 and the soldiers recently killed in Afghanistan.

“My hope and prayer for this country is that things can get better and God can provide,” De Casas said.

His faith helps him see how God can work through difficult times, he said.

“The amount of people who showed up in church after 9/11—people were seeking answers to questions about life, loss, everything. So, through faith, I think it's important to remember that God is trying to bring people closer,” De Casas said.