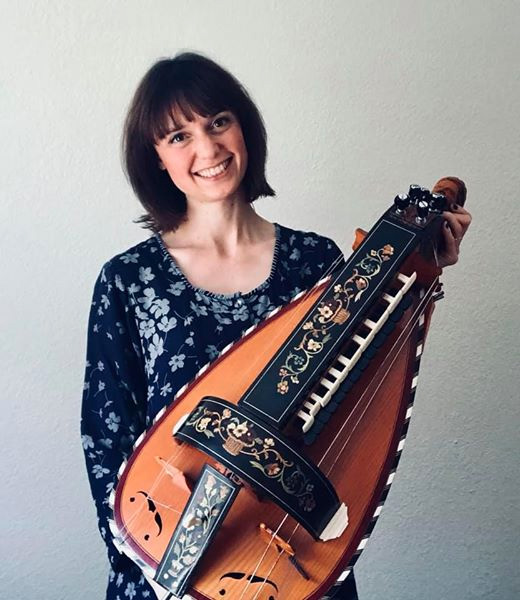 Riverside, Calif. (May 18, 2020) – When Dr. Mary Vanhoozer was in high school, she saw someone at a concert playing an unusual instrument that drew her curiosity.

“I heard the sound and I was like, ‘that’s what I want to do!’ I became obsessed,” said Vanhoozer, an adjunct professor of piano at California Baptist University.

The instrument was a hurdy gurdy, a stringed instrument that creates a tune by turning a wheel with one hand and operating a keyboard with the other to change pitch. It sounds like a bagpipe.

The hurdy gurdy is a traditional instrument in her mother’s native France. Vanhoozer herself grew up in Scotland, where bagpipes are popular, and she enjoys the sound that the hurdy gurdy evokes.

“I love the folk repertoire for the hurdy gurdy that is from many different European countries,” she explained.

Vanhoozer was a teenager when she added the hurdy gurdy to her Christmas list, but it did not land under the tree until a couple years ago when her husband surprised her with it. After she received the hurdy gurdy, Vanhoozer found a musician in Redlands to teach her how to play.

“He was so excited that anyone under 60 was interested in it,” Vanhoozer said. “He knows all this stuff and wants to pass it on to the next generation of players.”

Together they have played once a month at a Riverside farmers market. She has also joined a group of hurdy gurdy players in the greater Los Angeles area.

“For me, it’s been the perfect combination of piano and violin,” said Vanhoozer, who plays those two instruments.

Vanhoozer has taught musicianship, recital and piano among other courses at CBU. She encouraged her students to take advantage of this time.

“For the music students out there, what an opportunity it is to explore creative ways to share your gift in this season,” Vanhoozer said. “There are so many musicians who have stepped up to the plate and shared in creative ways that’s inspired me and that’s been a real gift.”

When the coronavirus pandemic closed things down earlier this year, Vanhoozer decided to produce online performances. It reminded her of the musicians playing on the Titanic as it was sinking.

“There’s something about that. We need people to continue a routine and to help create a semblance of things being OK. And as Christians, we know things are OK at the end of the day,” Vanhoozer said. “I wanted to meet people in their grief and in their suffering and be there as a presence (to) minister light and hope and joy because I believe in those things.”