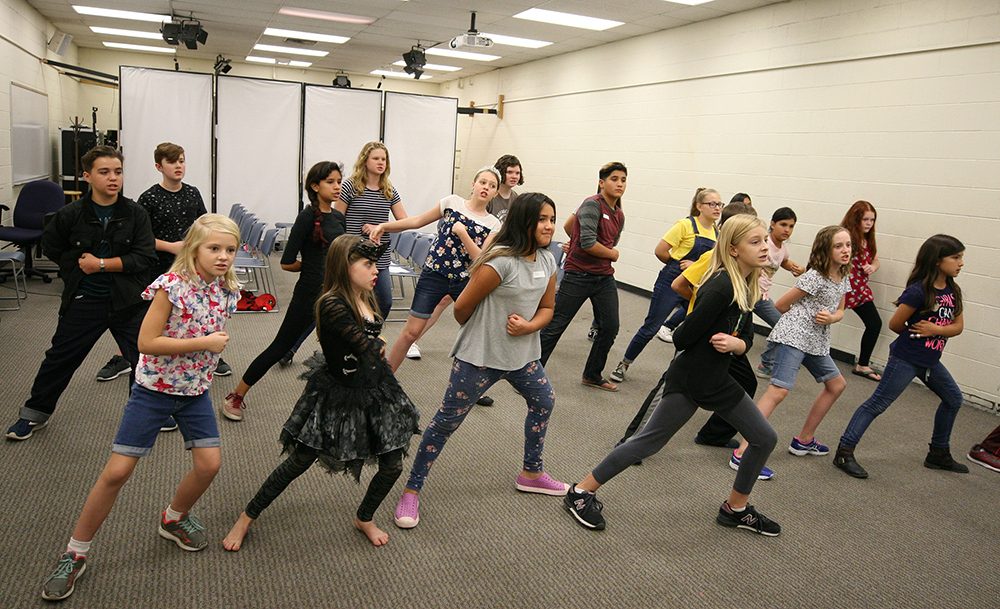 Riverside, Calif. (Dec. 11, 2018) – “When you’re dancing on stage, you need to move together,” Lisa Lyons, adjunct professor of theatre at California Baptist University, gracefully instructed her students. Responding to Lyons’ direction, 20 students, ages 8-17, practiced the moves repeatedly. Then they progressed to perform the routine while singing “Be Our Guest” from the Broadway show “Beauty and the Beast.”

The musical theatre class Lyons is teaching is one of several offered through an education partnership between CBU and Inland Empire Musical Arts (IEMA). Approximately 130 children were on campus at different weeks during the fall semester, gaining knowledge and experience in the world of music and theatre.

The musical partnership is a testament of the desire for quality music and theatre training for youth, said Michelle Elliott, director of IEMA.

Elliott was homeschooling her children several years ago and unable to find music programs for them nearby. That led to her start IEMA in 2016. IEMA initially offered beginning music classes only to homeschoolers but when inquiries about the classes spiked, she opened up the classes to the public.

Elliott then contacted the Shelby and Ferne Collinsworth School of Music at CBU, looking for referrals for music teachers. Since then the School of Music and IEMA have formed a partnership. Children start with IEMA for beginning and intermediate music, sometimes taught by a CBU student. They then can advance to the classes offered at CBU.

For music, students can take classes in piano or audition for an ensemble group such as the symphonic band, string orchestra or choir. While string and choir students make up their own groups, the band students participate with the CBU Symphonic Band.

“To play with the university’s Symphonic Band challenges them to improve on their instrument and gives them exposure to the rigors of our performance ensembles,” St. Marseille said.

The Youth Acting Academy portion of IEMA provides students ages 8-17 with a theatre arts experience that integrates drama, movement, music and stagecraft. CBU faculty and students teach acting fundamentals, Shakespeare and musical theatre. The IEMA students will perform “Seussical” next spring, using the same set CBU students will use for their production of “Barnum.”

The benefits to CBU are several, said Lee Lyons, professor of theatre. They include introducing families to the CBU theatre program, having child actors to draw from if a CBU production needs one, and preparing youths for theatre at CBU if they choose to enroll, he added.

“The No. 1 benefit is having access to the CBU faculty,” Elliott said. “They have wonderful faculty members who now have access to invest in, instruct and mentor students at a young age.”