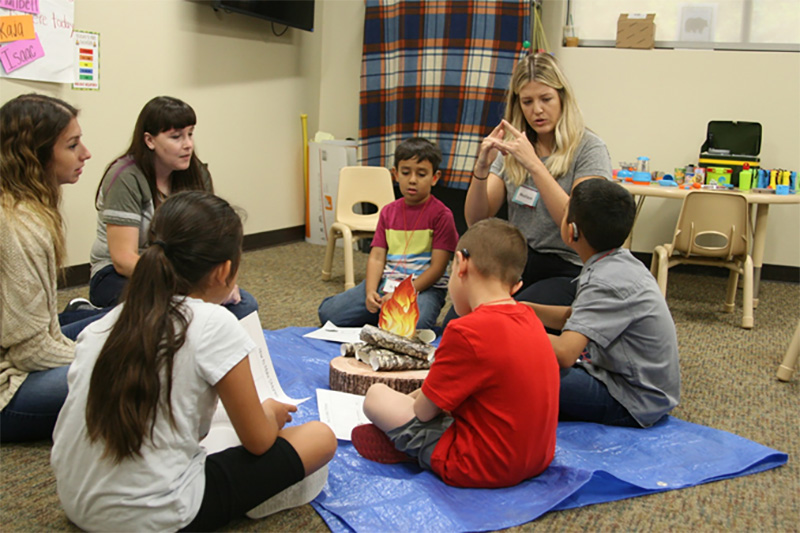 Riverside, Calif. (July 1, 2019) – Graduate students from California Baptist University and a group of children gathered around a makeshift campfire to chat about tasty treats.

“What do you need first to make a s’more?” a CBU student asked. The children responded by communicating using American Sign Language (ASL). Layer by layer, the kids signed each ingredient while preparing their treats, which they proceeded to eat.

The activity was part of the Language and Literacy Camp organized by the Clinical Education Center at CBU. Nineteen children who are deaf or hard of hearing attended. They ranged in age from toddlers to 8-year-olds. CBU hosted the free camp that was offered in six sessions over a three-week period in June.

Graduate students from the Master of Science in Speech Language Pathology program led the activities and speech therapy sessions.

“The camp is an enrichment program to foster literacy and literacy awareness,” said Dr. Danette Bonillo, director of the Clinical Education Center.

Children usually sign in ASL, but ASL has different grammatical structures from English, Bonillo said. For example, articles are missing and word order is different in ASL.

“We want them to be aware that written text is different than how they sign,” Bonillo said. “We want to help them learn how to read and write sentences that are grammatically accurate so that can then foster ongoing learning.”

The camp also gives CBU students opportunities to learn about deaf culture and to run a group program, Bonillo said. The students created the lessons, activities and parent handouts.

“We’re empowering our students on how to run groups, how to coordinate and work together as a team to build a successful camp,” Bonillo said. “The other thing I would love for them to get out of this is to meet a need. When you have the ability to create something amazing because there is a need, you need to do it, whether it’s in your comfort zone or not.”

Kelcey Kornek, a CBU graduate student, increased her sign vocabulary while assisting at the camp.

“A challenge is when they sign something we don’t know. And just like any other language, sign has its own dialect,” Kornek said. “The biggest reward has been learning so much sign in such a quick time. I’ve learned a lot and it’s fun to be able to communicate with them.”

Heidi Edwards, a CBU graduate student, said helping the children persevere in communicating was both the biggest challenge and the biggest reward.

“I try to keep them motivated and keep a positive attitude. Once we do work through something, the more times they do that and have success, the more willing they are to keep trying to communicate,” Edwards said.