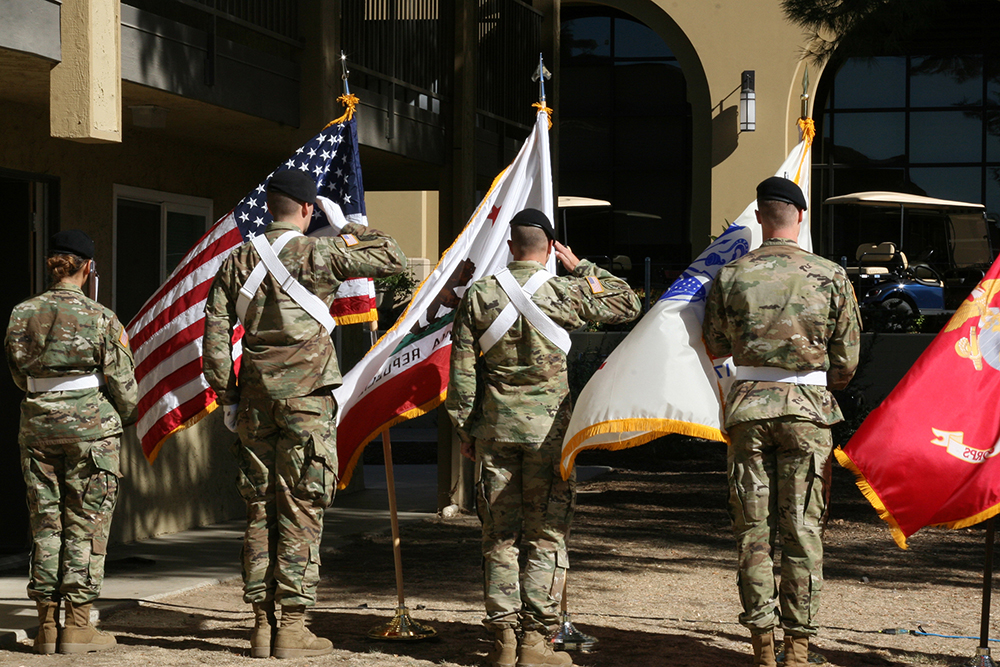 Riverside, Calif. (Nov. 12, 2018) – “Being a veteran means feeling a surge of pride when the American flag passes or during the national anthem,” Ashley Barton, a psychology senior who served in the U.S. Marines, told a Veterans Day audience at California Baptist University.

“Being a veteran means knowing the cost of peace firsthand and that cost has a first name, a last name, a middle initial and parents,” Barton continued.

The Veterans Resource Center at CBU hosted a Veterans Day remembrance event to honor U.S. service members on Nov. 12, the official observance of the national holiday this year. The Veterans Resource Center opened in September and is available to the nearly 390 veterans and dependents using their VA benefits at CBU. The center is located in the Office of Student Success in Lancer Arms North. It provides assistance such as providing certification of classes to the Department of Veterans Affairs and academic planning and relevant literature for a student’s financial aid. The center also features a computer lab with a study room, a kitchen and sofas.

The ceremony, held on the lawn behind Lancer Arms North offices, included the posting of colors, reading of the Presidential Proclamation on Veterans Day, laying of a wreath and recognition of faculty and staff veterans.

“It means the world that CBU would hold an event like this. We’re a very small-knit community,” Barton said. “For some people at CBU, it’s been 40 years since they’ve been in (the military). People forget to thank them.”

Sarah Weber, president of the Student Veterans Association (SVA) and who served in the Coast Guard, spoke highly of Dr. Ken Pearce, professor of psychology, during the event. Pearce served in the Army during Vietnam.

“I have the privilege of honoring somebody who left a legacy for student veterans on this campus,” Weber said. “We want to thank Dr. Ken Pearce for being a hero to us, being a role model and a leader.”

He has worked to educate faculty and staff about student veterans over the years and encourages the veterans, Weber added.

“I was floored that would happen. It’s quite an honor,” Pearce said of the recognition.