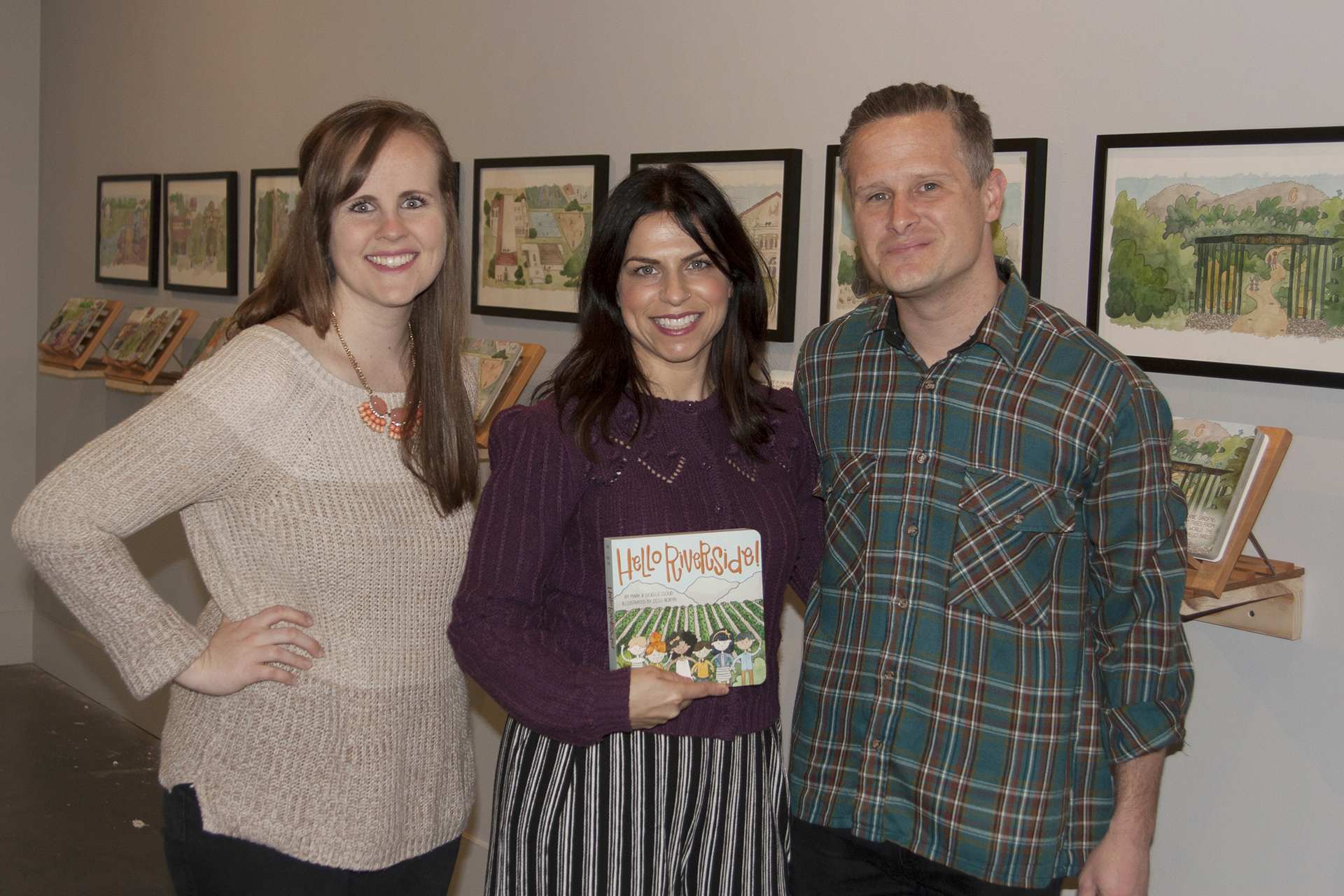 (From left) Jessica Robyn (nee Ford ’13), Giselle Cloud and Mark Cloud (’05) display their book “Hello Riverside,” a children’s board book. The book and illustrations are featured at an exhibit at the CBU Gallery through March 4.

Riverside, Calif. (Jan. 18, 2017) – A university art gallery may seem an unlikely place to display a children’s book, but for an exhibit now showing in downtown Riverside it makes perfect sense.

California Baptist University alumnus Mark Cloud (‘05) and his wife, Giselle, collaborated with another CBU graduate, Jessica Robyn (nee Ford ‘13), to create a children’s board book, “Hello Riverside,” that presents Riverside in a whimsical way. The team’s work is the latest exhibit at the CBU Gallery.

The Clouds wrote the book and Jessica Robyn created the illustrations. “Hello Riverside” takes children on a tour of Riverside, stopping at 12 landmarks.

Mark said the idea for the book was prompted when he and his wife began to read to their young son. With Mark growing up in Riverside and Giselle growing up in the Inland Empire, the couple developed a fondness for the city.

“The main purpose of writing this book was to introduce Riverside to its newest generation of residents,” Cloud said. “We wanted to create something for parents and grandparents to share [with children] … that would help both of them foster a love and appreciation for the city.”

Jessica Robyn said she had recently found out she was pregnant when asked to illustrate the book, which made it perfect timing.

Jessica Robyn enjoys producing artwork that is fun and whimsical, which can be seen in the book and other illustrations that are on display at the Gallery. She admits that doing serious art in class at CBU was a challenge.

“I just wanted to doodle and have fun and create something playful and happy,” Jessica Robyn said. “I appreciate being able to make people smile.”

The book will be available for $10 at www.helloriversidebook.com by month’s end.

The exhibit is CBU Gallery’s first to feature work by CBU alumni.

Kristi Lippire, assistant professor of visual art, said the exhibit demonstrates support for alumni, promotes CBU programs and benefits current students by providing an example of how to use their skills after graduation.

The exhibit runs through March 4 at CBU’s Gallery, located at 3737 Main St., Suite 101 in downtown Riverside. The gallery is open Tuesday–Saturday from noon–8 p.m.