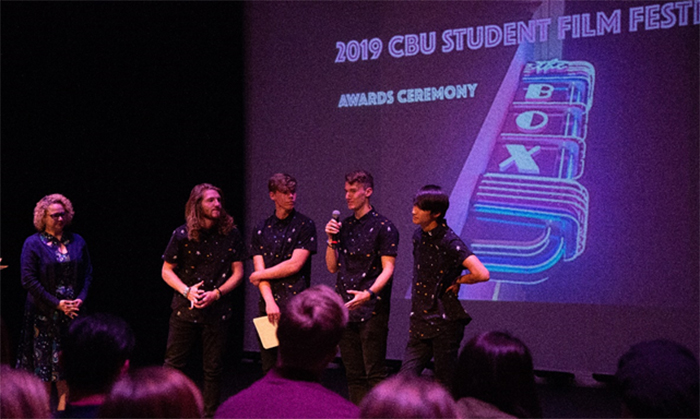 Diaz, a film studies sophomore, said his admiration of the noir film genre inspired the production.

“This genre is often taken seriously but I wanted to put a comedic twist to the film,” Diaz said.

“It is really special to see people enjoy something that I spent so much time on and I am really touched that they appreciated what I put my time into,” Diaz said of the crowd’s reaction to the film.

This year’s film festival drew more than 20 submissions. The top 11 productions were selected to be showcased in conjunction with the Riverside International Film Festival. The short films ranged in genres from noir, comedy, romance and drama.

Dr. Melissa Croteau, professor of film studies at CBU, said she was thrilled students got an opportunity to gauge their films through the audience’s reactions.

“It is great for students to be able to screen their films in front of a live audience—and not just classmates and professors, but for the public. This kind of experience propels students forward,” Croteau said.  “The opportunity gives students a chance to see their film up on a screen and listen while the audience laughs when they meant a scene to be funny and clap at the end in support of their project. It is a priceless feeling.”

Miguel Iniesta, an applied theology sophomore minoring in film, oversaw the cinematography and the editing of the production.

“I learned how important it is to take your time and be patient with every shot you take as well as to be very intentional about how you light it, what song is playing in the background, and appreciating the craft and art of film,” Iniesta said.

David Ramos, a film studies senior with a concentration in production, directed and wrote the film “Taytay.” The film focused on the relationship between an Asian father and his Asian-American daughter. Ramos won the Outstanding Senior award for the production.

Ramos said he drew his inspiration for the film from his own personal experience as a first generation Asian-American.