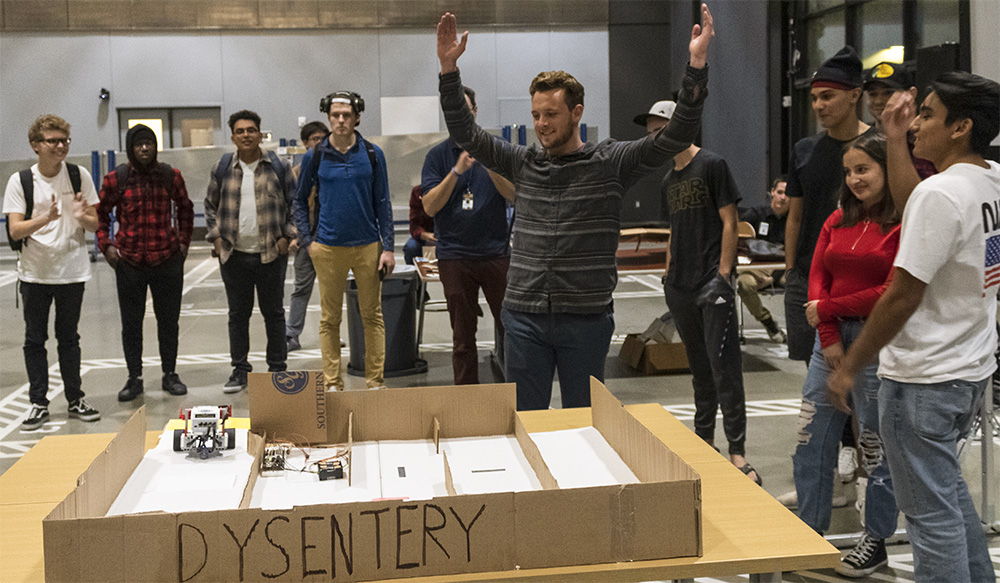 Riverside, Calif. (Dec. 3, 2019) — Freshman engineering students at California Baptist University displayed their robotic constructions during the Robots Got Talent event on Dec 2. The event featured nine teams who competed in a semester-long process to construct robots designed to perform a unique set of functions.

The Gordon and Jill Bourns College of Engineering at CBU hosted the event in the multipurpose design hall of the Dennis and Carol Troesh Engineering Building.

“The competition is called Robots Got Talent because it allows students to have an open slate to create a robot that will impress the audience,” said Dr. Matthew Rickard, professor and chair of bioengineering at CBU. “The aim is for students to be able to work in a team, gain experience with design and be able to present what they created to an audience.”

Students enrolled in the Introduction to Engineering course (ERG 101) are given a design kit at the beginning of the semester to create customized robots. The kit consisted of remote controls, motors, sensors and LEGO pieces.

The audience voted on its favorite robot and the members of the winning team received 3D printed trophies. This year’s winner was The Itsy-Bitsy Spider robot that was designed to climb up a wall and then display a flag when it reached the top of its journey.

Other teams in the competition presented robots that performed tasks such as lifting objects, drawing, and detecting hazardous odors.

“The competition also allows freshman students to understand the differences between the engineering disciplines including electrical, mechanical, and biomedical engineering, in order to help them choose an engineering major they enjoy,” Rickard said.