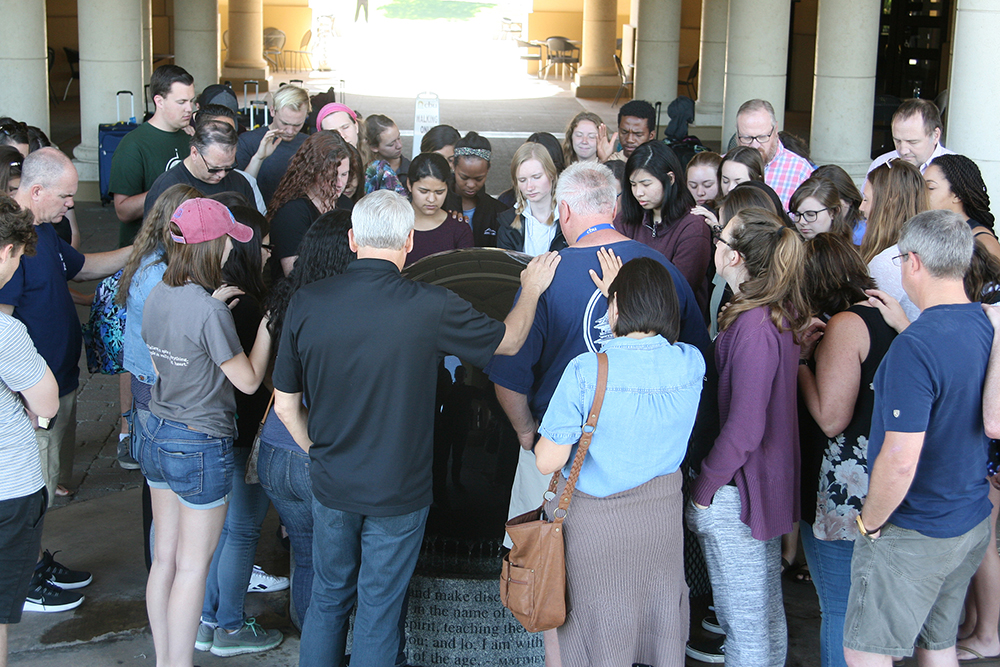 Riverside, Calif. (May 7, 2017) — The Office of Mobilization at California Baptist University kicked off its 2018 summer of service with the traditional send-offs at the Kugel over the weekend.

Per CBU tradition, before their International Service Project (ISP) departure, teams gather to pray at the Kugel, a globe that rests on a base with the scripture from Matthew 28:19-20 etched in stone, symbolizing CBU’s commitment to the Great Commission. This year, more than 300 volunteers, comprising 37 ISP teams, will serve in 24 different countries.

This summer marks the 23rd year of global outreach by students, staff and faculty members at CBU.

Teams typically serve in areas such as conducting sports camps, teaching English to university students, providing healthcare and engineering skilled service and assisting with various children’s ministries. The purpose is to work with the indigenous church and its leaders to form connections with community members.

“Our goal is to see and recognize how God is already at work, making His name known amongst the nations, with hearts grateful to be a part of what He is doing,” said Kris Smith, assistant director of Mobilization at CBU.

Teams during the first and second wave for ISP will depart from CBU throughout the month of May. Teams will go to Asia, Taiwan, Middle East, Spain, Uganda, United Kingdom, Canada, Dominican Republic and South America.

“We used a reference from Philippians where the Apostle Paul relays the idea of advancing of the gospel,” said Jeff Lewis, director of Mobilization at CBU. “We can focus on gospel development and the idea that as a follower of Christ, we’re to be strategic participants in the advancement of the gospel.

“Global service should be a part of a natural maturity process as a follower of Christ,” Lewis told a group of friends and family members at the send-off event on May 5. “Thank you for supporting your students to go abroad and serve.”

For Chloe Mazakas, a nursing junior, this will be her first ISP trip. Her team of nursing majors will serve in mobile clinics in Southeast Asia.

“I’m excited to serve and put my faith into action,” Mazakas said. “I’ve been praying about going on an ISP trip and finally decided to go for it.”

Brittney Perkins, a nursing senior, is serving on her second ISP team.

“I grew so much spiritually during my first ISP trip that I wanted to go again,” Perkins said. “I also believe that this is what God is calling me to do and I want to be obedient.”