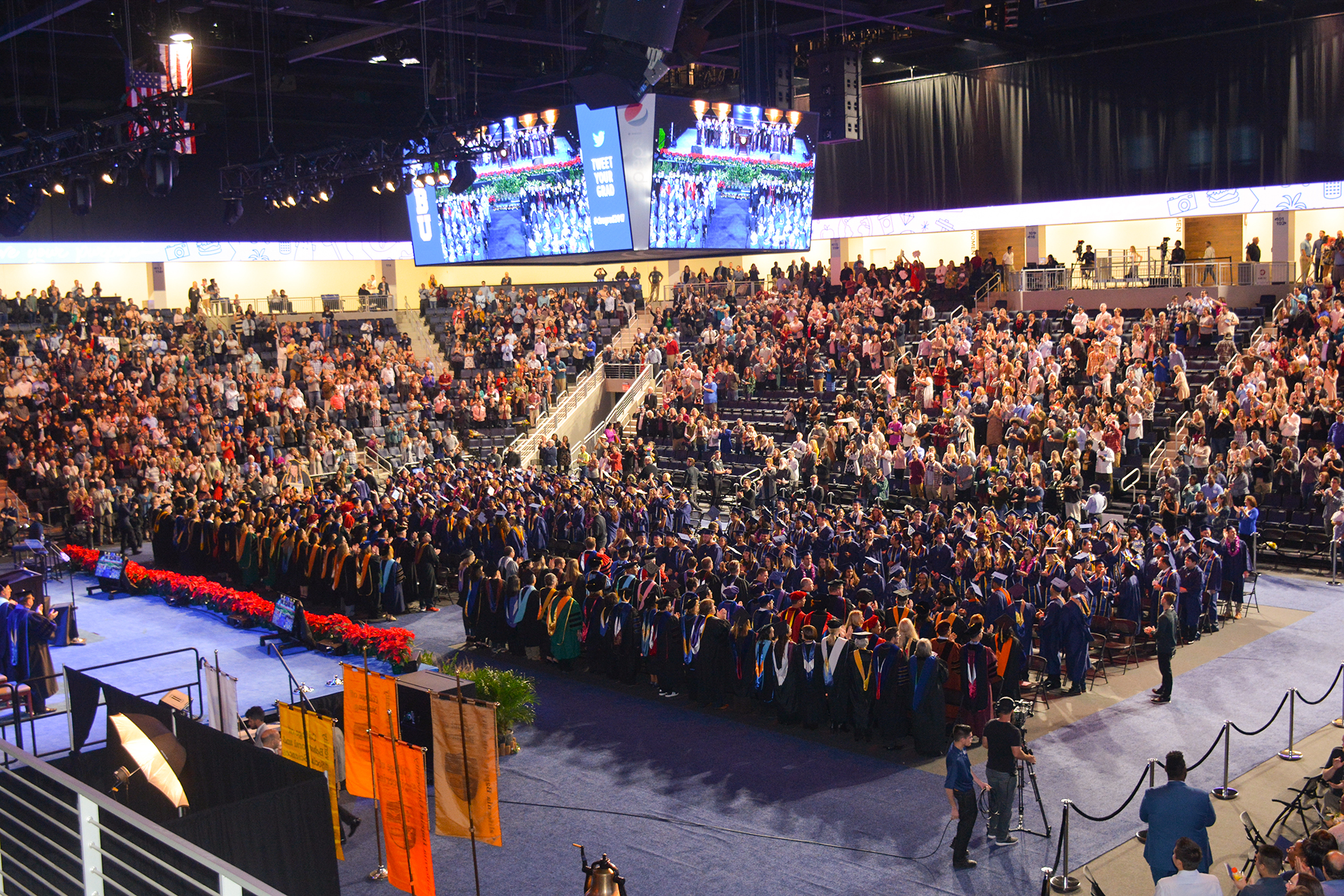 Riverside, Calif. (Dec. 15, 2017) – Fall commencement at California Baptist University wrapped up two days of celebration as the Fall Class of 2017 held the first commencement ceremonies at the Events Center. Students received recognition in front of cheering friends and family members on Dec. 14 and Dec. 15.

An estimated 8,000 individuals attended the three ceremonies at CBU.

This fall 806 students were eligible to participate in commencement ceremonies—a significant number considering the total enrollment was 808 students in 1994, the year Dr. Ronald L. Ellis became president of the university.

In his commencement address, Ellis noted that the ceremonies in the Events Center were an example of the many components CBU has assembled over the years that benefit students.

“During the past year, a number of important building blocks have been put in place or further reinforced to enhance the CBU experience for the members of this year’s graduating class and for those who will follow in the years, even generations to come,” Ellis said in his commencement address. “A prime example of campus development is this wonderful new Events Center. Since its opening this fall, the center has hosted student orientation activities, banquets and chapel services. It is the new home of Lancer men’s and women’s basketball. And thanks to this venue, for the first time in years, commencement ceremonies are proudly back at home on the CBU campus.”

During the ceremonies, Ellis commended the students and their families for their commitment to education. In that spirit of pursuing academic excellence, Ellis separately honored Assembly Member Jose Medina and state Sen. Richard Roth with “Champion of Students” awards.

Ellis said that their yearlong advocacy on behalf of students to continue funding Cal Grants was a significant commitment to higher education.

“By fully funding financial aid, you help keep the promise alive for California students and help the state meet its workforce development needs,” Ellis said when presenting the awards.

Ellis reviewed a number of achievements at CBU during the past year including growth in academic programs, athletics and other areas. He also cited significant campus improvements, such as an engineering building currently under construction and more projects now being planned.

“Soon, work is scheduled to begin in Lancer Plaza to expand the athletic training center and build CBU’s first multi-level parking structure. The five-level car park is designed to accommodate more than 1,450 vehicles and scheduled to come online in the fall of 2019,” Ellis said. “The project is part of a multi-stage development plan for Lancer Plaza that also features a new main entrance into the campus from Adams Street.”

Drawing a parallel from CBU’s strategic growth model, Ellis encouraged students to use their educational experience as a foundation for continuing personal growth.

“May your CBU experience and your CBU degree serve as rock-solid building blocks in a strong foundation for your future goals and dreams.  And May the Lord continue to bless!” Ellis said.