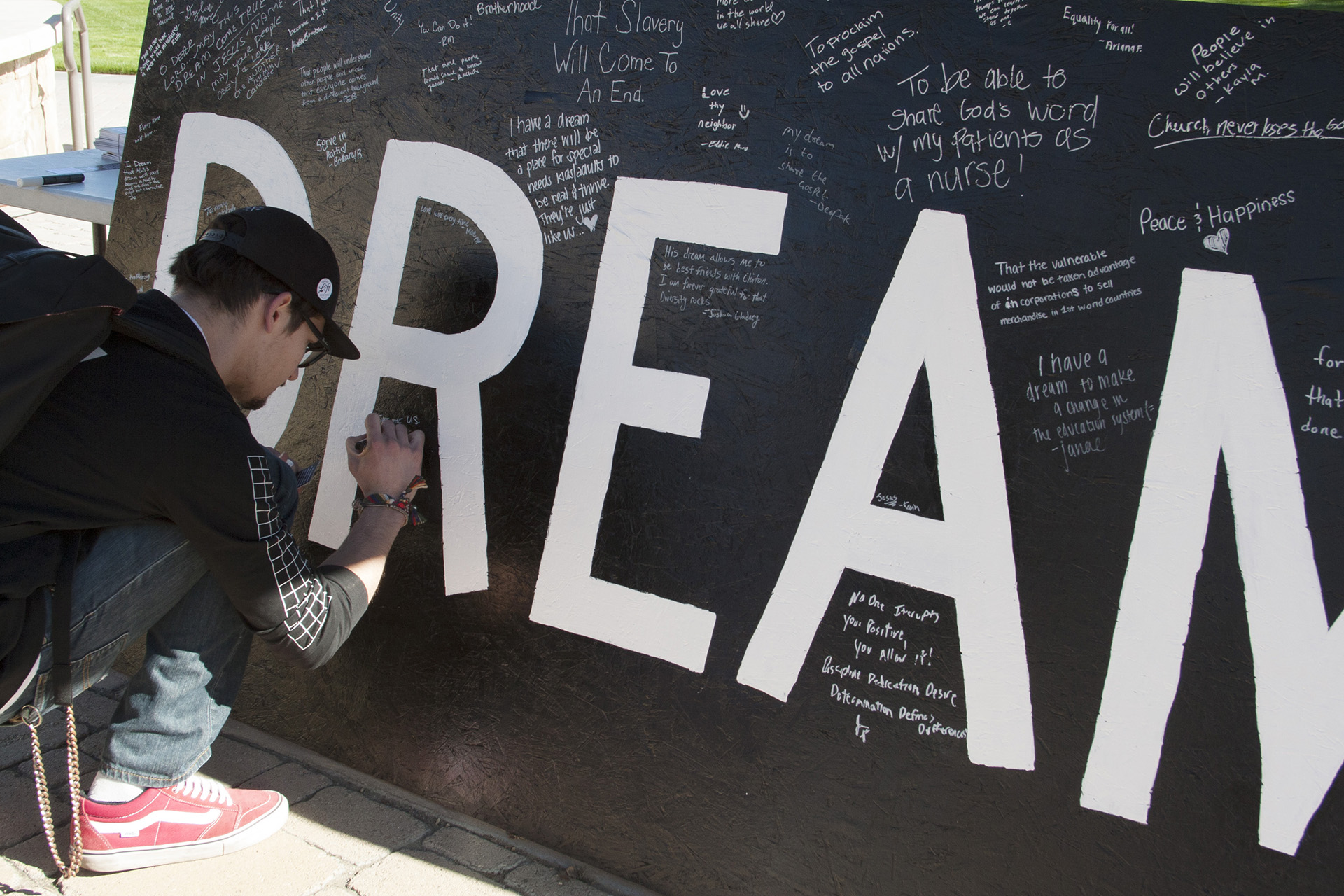 California Baptist University students write down their own dreams or reflect on the Martin Luther King Jr. “I Have a Dream” speech at an MLK tribute held at Stamps Courtyard on Jan. 17.

Riverside, Calif. (Jan. 18, 2017) – After a day off to observe the Martin Luther King Jr. Day holiday, students, faculty and staff at California Baptist University returned to campus on Jan. 17 with an opportunity to pay tribute to the late iconic figure of the civil rights movement.

The event in the Stamps Courtyard was the first of several planned over the next few weeks by Community Life to honor King and highlight other influential African-American figures.

George Martin, director of cultural and commuter programs in Community Life, said these types of events educate and promote support for one another.

“It’s important to be exposed to the different cultures, different heritages and to be able to appreciate and embrace differences…so that we can have a better appreciation of one another,” Martin said.

At the tribute, people wrote on the “Dream Wall” their hopes for the future and had an opportunity to watch King’s “I Have a Dream” speech, which played on a loop throughout the afternoon. Additionally, drummers, featuring elementary students from Excel Prep Academy (Moreno Valley, California) performed at the event.

McKay Vandenberg, an English senior, listened to King’s speech and was inspired to write on the Dream Wall.

“Martin Luther King Jr. had a message that still is relevant today and not just in the ‘60s,” Vandenberg said.

On Jan. 26, a poetry slam event will be held in the Community Life lounge. Community Life will partner with the Slam Poetry Club at CBU to feature student poets and two local spoken word artists, Brandon Allen and Treesje Thomas. Additionally, historic and current African-American poets and figures will be highlighted at the event.

“Poetry—we use the term spoken word—was a major part of expression in the African-American culture,” Martin said.

On Feb. 10, there will also be a “Living Out the Dream” event in Innovators Auditorium. It will include vocal performances by students, a church choir and local recording artists Joslynn James and Leon Hawley. Students will also re-enact historical characters, such as King, Maya Angelou and Harriet Tubman.