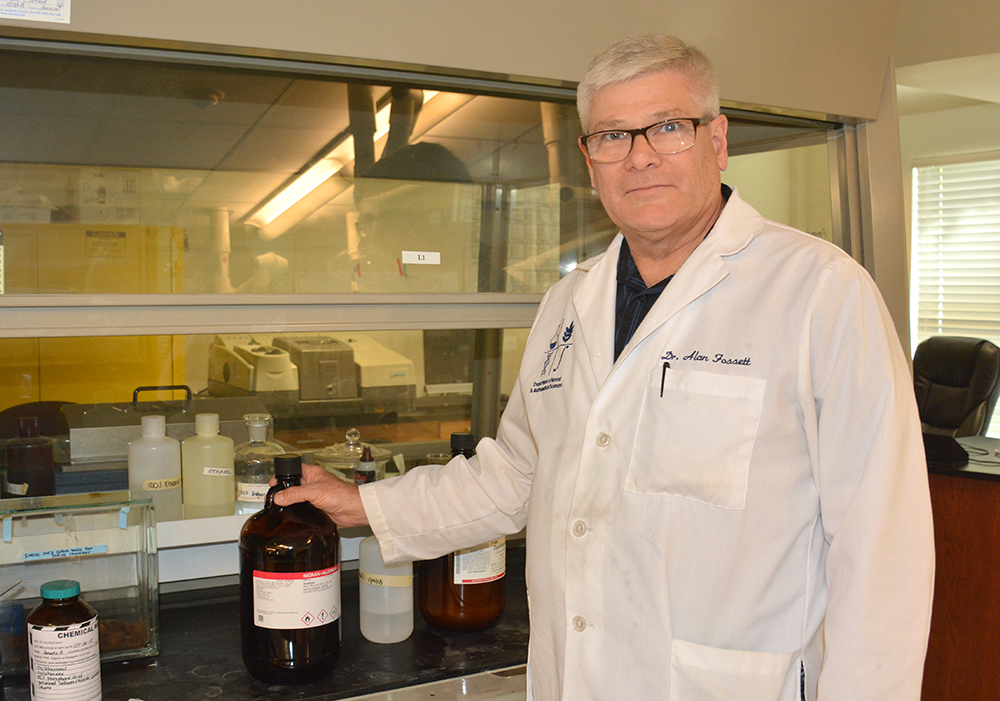 Riverside, Calif. (May 29, 2018) — Dr. L. Alan Fossett, a California Baptist University faculty member, fondly remembers his first day on the job more than 30 years ago. Driving in his Ford Escort hatchback, he pulled onto Palm Drive and proceeded to park behind the James Building.

“All of the departments were housed in the James Building then,” recalled Fossett. “There was also a cafeteria in the basement of James, what is now James West.”

Fossett accepted a position as a professor of chemistry at then California Baptist College, a title he holds to this day. Fossett is one of the longest tenured professors at CBU. Fossett said he is living his purpose each day on campus.

“I was a junior in high school when I started to believe that teaching chemistry is what I wanted to do with my life,” Fossett said. “CBU is a great place to work, that’s why I am still here. There are good folks here, good people who are dedicated to each other and Christ.”

Fossett got his Bachelor of Science in Chemistry from Northwest Nazarene College in 1982 and his doctoral in chemistry from the University of California, Davis in 1987. In 1986, he married his wife, Debbie; the couple grew up in the same church. They have two children, Shaun and Amy (’15). In 1988, he ended up at CBU; a path that he said had God’s purpose written all over it.

Fossett said that the first class he taught consisted of nine students. In contrast, during the spring 2018 semester he taught several lectures and labs with more than 100 students. Of the six offices that Fossett has occupied throughout the years, two of them do not exist anymore as they were converted into lab spaces. Back in 1988, Fossett had to share one lab with the entire science discipline. Today, there are four labs dedicated specifically for chemistry.

“I enjoy teaching students how chemistry is organized. As a teacher, I’m helping students to see how there is design in all of it,” Fossett said. “When you study elements there is an explanation for the way they behave.”

With a smile, Fossett said that L-Alanine is his favorite amino acid, as it closely resembles his name.

“Students are all different, all unique, each class can take you in different directions,” Fossett said in response to explaining his teaching style.

From Fossett’s perspective, the formula for growth at CBU is not a complex solution. It is a combination of offering programs that students need and key leadership from President Dr. Ronald L. Ellis, who has brought in the right people to oversee and teach the programs, Fossett said.

“Technology has changed, new buildings and labs have emerged, but ultimately, I want to be a good steward and exercise appropriate care to the students I’ve been entrusted with at CBU,” Fossett said.