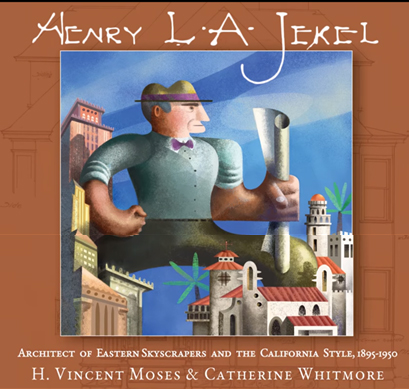 The 224-page book, “Henry L.A. Jekel: Architect of Eastern Skyscrapers and the California Style, 1889-1950,” was published with financial support from CBU and a crowdfunding campaign. The event was held in a fitting location—the Staples Room within the James Complex that Jekel designed.

The book’s authors, Dr. Vince Moses and Cate Whitmore, hosted a discussion on the tradition and architectural styles of Jekel.

Jekel was born in 1876 and by his 20s, he became a leader in the design of skyscrapers in New York. Jekel also designed an estimated 55 buildings in Riverside including Benedict Castle and the First Congregational Church in downtown Riverside, which was the project that first brought Jekel out West.

Dr. Ronald L. Ellis, president of CBU, shared his first impression of the James Building at the event.

“When I came and set foot back in 1994 to interview for the president position, I was just struck by the architecture of this building. I set foot in the James entrance and I thought, ‘my, my, what a gem!’” Ellis said.

It became a personal resolution to continue the Mission Revival Architectural style that is featured throughout campus to this day, Ellis said.

“This is important work being done here. This is legacy work,” Ellis said of the author’s research for the book. “I’m very respectful of the work that went into this project and the value that this will have.”