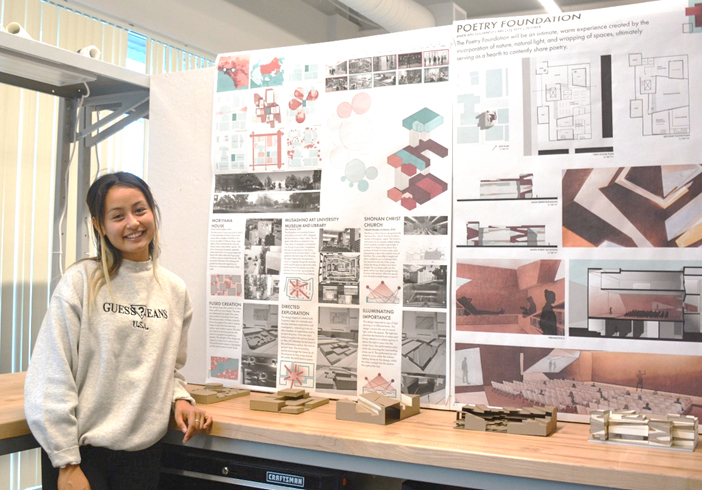 Andriani Sugianto, an architecture junior, won the Faculty Award for Highest Performance Second Year for her site analysis diagram project she worked on in her Design Studio II course.

Sugianto said the diagram, of a fictitious poetry foundation in downtown Riverside, was a semester-long endeavor. Sugianto implemented several unique designs into her site plan including a café, a public collection space, a library and a performance area.

“I worked really hard and in the end it paid off,” Sugianto said.

Keelan Kaiser, architecture program director, said the award ceremony is meant to recognize students for their academic performance and their academic improvement.

“Some students are going to get awards, but this is also a time of fellowship. Supporting each other and cheering each other on,” Kaiser said. “Winning awards is part of academic education and architectural advancement. To be competitive and be recognized for their good work is an important part of their practice and developing one’s practice of architecture.”

Jacob Gonzalez, an architecture sophomore, also worked on the poetry foundation project. In his project, he focused on providing separate spaces within the building for both public and private audiences.

“I gained experience in studying the area and seeing how lighting worked in certain areas in the day and night, which was great because in future projects I can use more natural lighting rather than artificial,” Gonzalez said.

William Hunnel, an architecture graduate candidate, was recognized at the awards ceremony for completing his degree.

“During my time at CBU, I learned a lot about design, life and how you interact with people,” Hunnel said.