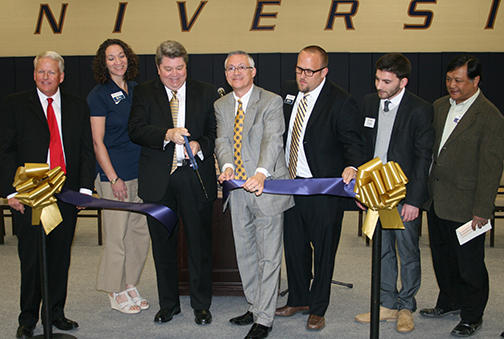 RIVERSIDE (Jan. 15, 2013)--Students, faculty and staff at California Baptist University gathered Jan. 14 to dedicate the new 40,682-square-foot Recreation Center. The ceremony preceded the official opening of the facility, which has been eagerly anticipated for more than a year.

"It's always a good day to be Lancers," said Kent Dacus, vice president for enrollment and student services, "but on a day like today, we're especially fortunate."

Dr. Ronald L. Ellis, CBU president, said the dedication was the culmination of work that began in 2005.

"We acquired the property in this former shopping center with the idea that we would one day convert the space to use for student facilities," he said. "The dedication of the Recreation Center is one of the first steps in making that dream a reality."

An athletic performance training center opened next door to the Recreation Center last August to train CBU's student athletes. Both facilities are located in Lancer Plaza, formerly a shopping center on Adams Street.

The recreation center features a two-story rock climbing wall plus a changeable court space that allows for two intramural basketball courts, a collegiate basketball court or three volleyball courts. In addition, the space includes lounge areas, racquetball courts, workout rooms, men's and women's locker rooms and a cheerleading practice space. Even the roof is usable, with a running track and a soccer field covered with synthetic turf.