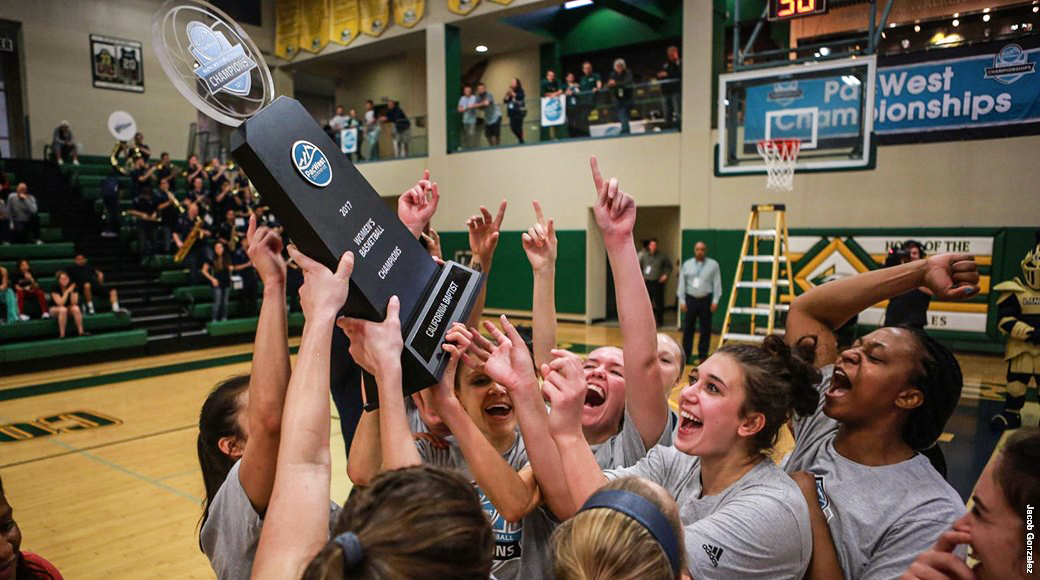 Riverside, Calif. (March 6, 2017) – California Baptist University men’s and women’s basketball teams are both gearing up for a run at March Madness.

For the third year in the row, the women’s team (31-2) is headed to the NCAA Division II West Regional. The Lancers will go in as a No. 2 seed, its highest seed ever, after winning both the PacWest regular season and PacWest tournament. The Lancers will travel to Alaska where top-seeded Alaska Anchorage University (AAU) will host the regional tournament. CBU will face Point Loma Nazarene University (PLNU), in the first round, on March 10 at 1:30 p.m., for the fourth time this season and the third time in less than three weeks. The Lancers have won all three games with PLNU this season.

When AAU last hosted the women’s West Region Championships in 2015, the Lancers won the regional and embarked on a run all the way to the D-II Championship game. Six players from that historic group are still with CBU, including five seniors: Courtney Nelson, Olivia Weber, Erin Asher, Kamille Diaz and Cassidy Mihalko, along with junior Emily Schmidt.

The CBU men’s squad drew a fourth seed for the West Regional Tournament, which will be hosted by No. 1 seed University of California, San Diego. The Lancers (25-4) will open up the tournament against No. 5 San Francisco State University on March 10, at 5 p.m. The winners from Friday's games will advance to the semifinals on Saturday (5 p.m. and 7:30 p.m.), with the two remaining teams competing for the West Regional Championship and a berth to the Elite 8 in Sioux Falls, South Dakota, on Monday at 7 p.m.