“Barnum” brings the spectacle of the circus to Wallace Theatre 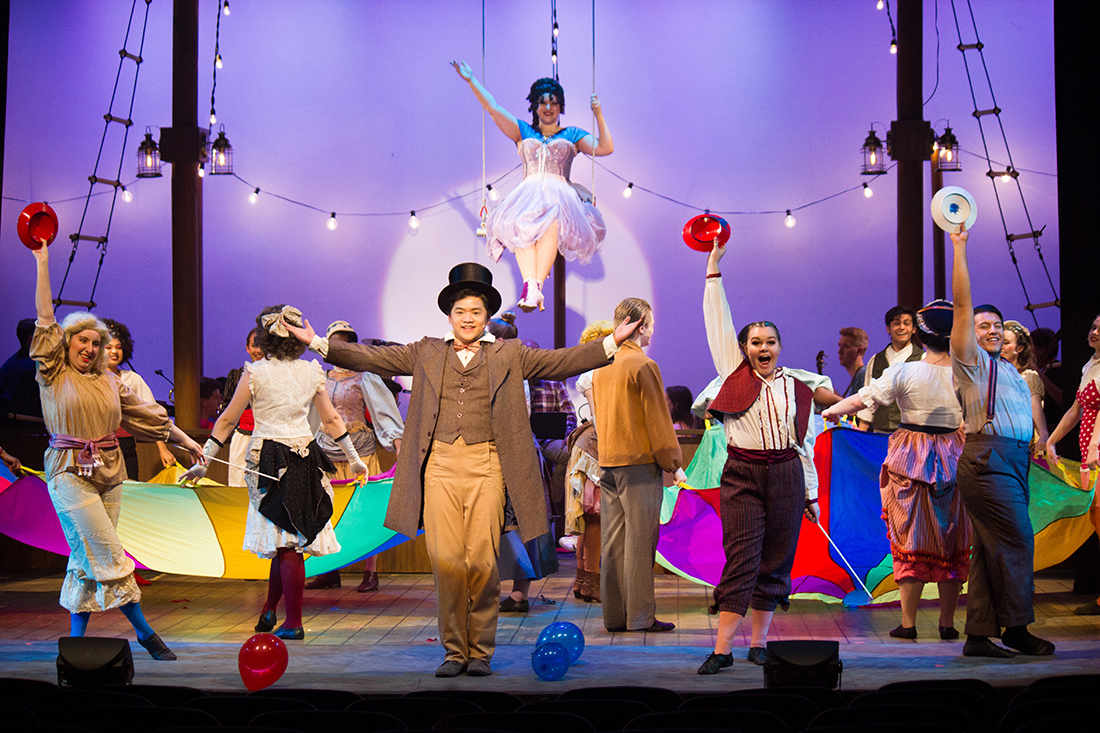 Riverside, Calif. (April 3, 2019) – The theatre program at California Baptist University is bringing the razzle-dazzle and charm of P.T. Barnum to the Wallace Theatre stage, starting on April 5. Students performing as clowns, jugglers, tumblers and acrobats will help produce the circus atmosphere that Barnum is famous for creating.

“Barnum” looks at the legendary entertainer’s life before he formed his circus routine with James Bailey. The musical follows Cy Coleman and Michael Stewart's score that includes "Join the Circus," "The Colors of My Life" and "Come Follow the Band."

A preshow routine before each performance will include clowns, stilt walkers and a card illusionist.

“It’s a circus. Every number is a big production number,” said Lisa Lyons, adjunct professor of theatre and the play’s director. “The audience should be entertained the whole way through.”

For the show, students learned numerous acrobatic stunts in addition to dancing and singing, Lyons said.

Ryan Lee, a communication studies sophomore, plays P.T. Barnum. From remembering all his lines to doing magic tricks and costume changes, Lee had to work on enhancing his multitasking performance skills.

“Our show is so unique in the fact that it is not just like any other musical. It’s a musical circus,” Lee said. “I hope the audience walks away in awe of the spectacle of our show.”

As part of the ensemble, Jamall Bradshaw, a criminal justice junior, tumbles, sings and dances throughout the show. Bradshaw said he knew how to tumble before, but for the show he had to get in better shape so he could do cartwheels and handsprings, and then sing afterward.

“In ‘Barnum’ I feel that I have learned to always push myself and be on top of it so the group as a whole looks good while performing, and we can put on a great show for our audience,” Bradshaw said. “I hope the audience gets so much joy from watching the show and really getting to see what the life of P.T. Barnum and circus was like.”

Samantha Schroll, a theatre major, plays Swedish opera singer Jenny Lind. For the role, she learned a few Swedish phrases and how to affect a Swedish accent.

“One thing that I've learned from the play is to have fun with even the small tasks of life. We can add color to anything,” Schroll said.