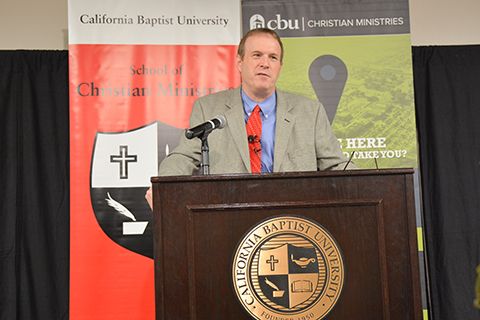 "The Internet can replace people, teachers can be separated from their students but we need to be living as the body of Christ and not be disembodied," said House, who spoke as part of the School of Christian Ministries Lecture Series on Nov. 2.

House teaches at Beeson Divinity School and has authored several books including Bonhoeffer's Seminary Vision: A Case for Costly Discipleship and Life Together. House, who has spent a lifetime studying German theologian Dietrich Bonhoeffer's teaching, shared his insights for Christian living in the context of a seminary education.

"He took time with students, to walk with them," House said. "He saw how God did the same thing by sending Jesus to walk with us and that was his motivation."

House said that Bonhoeffer's The Cost of Discipleship was a lecture to students and pastors alike.

"Bonhoeffer talked about costly grace," he said.  "Biblical grace is costly. It's not cheap, it's not just an idea, it was not a cheap price," House said. "Jesus calls us to come and die... Salvation costs everything but it's worth everything."

House said students should not become ministers if they do not understand that grace is a gift and it changes them.

Bonhoeffer wrote in The Cost of Discipleship, "Costly grace is the gospel which must be sought again and again … It is costly because it costs a man his life, and it is grace because it gives a man the only true life."

House also addressed the effectiveness of Bonhoeffer's ministry. Half of the Bonhoeffer's last seminary class was killed in World War II. Bonhoeffer himself was put to death in a German prison shortly before the end of war. Bonhoeffer never had a large number of converts or students. It was Bonhoeffer's best friend that preserved a lot of his writings after he died, House said.

As pastors, their commitment should be to Jesus and to feeding His sheep, not to growing church numbers, House said. Numbers can lead to greed.

"Bonhoeffer fed his lambs. He protected them and gave his life for them," said House. "Pastors should know each of their sheep's names, know their weaknesses… and lead them gently."

House said the church is the body of Christ. Believers have to physically be there for each other, he said.

"Jesus Christ was not just an idea… he was a physical person," House said.

He encouraged the staff and students to give their lives for each other.

"Be purposeful in a community committed to each other," he said. "We need to stop looking at each other as church people and see each other more as a family… as your brother or sister (in Christ)."

Giving an example of how to be there for others, House told of a time in his life when he faced big problems. Old seminary friends came from all over the country to be with him, he said.

"You know they would do it again if they had to, and I would do it for them as well," he said.