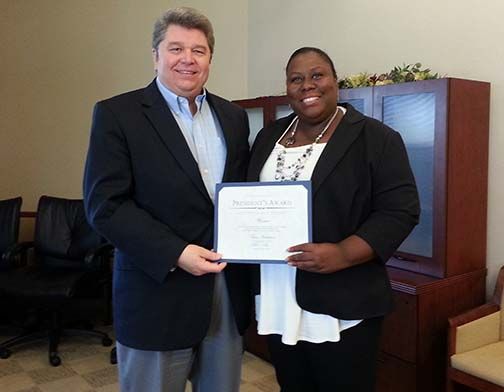 RIVERSIDE, Calif. (April 30, 2014)— Tara Anderson, a senior English major at California Baptist University, has been selected as the winner of the 2014 President's Award for Excellence in Writing. Dr. Ronald L. Ellis, CBU president, presented the award at a luncheon April 21.

Anderson's paper, In Between the Mountaintops: A Look at Langston Hughes' ‘Christ in Alabama', is an analysis of a poem. Dr. James Lu, professor and chair of the Department of Modern Languages and Literature, said the selection committee was unanimous in recommending the paper as the top winner.

"The analysis of Hughes' difficult poem impresses the reader not only as thorough and nuanced, but downright brave, as the author tackles the complex social problems of racism and religion in the South during the 1930s," said Dr. Amy Stumpf, assistant professor of society and religion. "The author takes notable risks with the topic, makes bold personal commentary and manages to prove her points with persuasion from a Christian perspective."

Anderson received a certificate and a check for $300.

Ellis also honored Robert James Sapunarich, a junior English major, as first runner up. His paper, Grace in the Maelstrom, explored Melville's Moby Dick, particularly in light of the Calvinist doctrine of election.

"Using rich organization and a strong, predictive thesis statement, the author successfully keeps track of the intricate moving parts of his argument," commented Lu. "This paper stands out as well-researched, drawing on a wide array of scholarship."

Sapunarich received a certificate and a check for $200.

The two entries were chosen by a six-member faculty selection committee using a formal voting process.