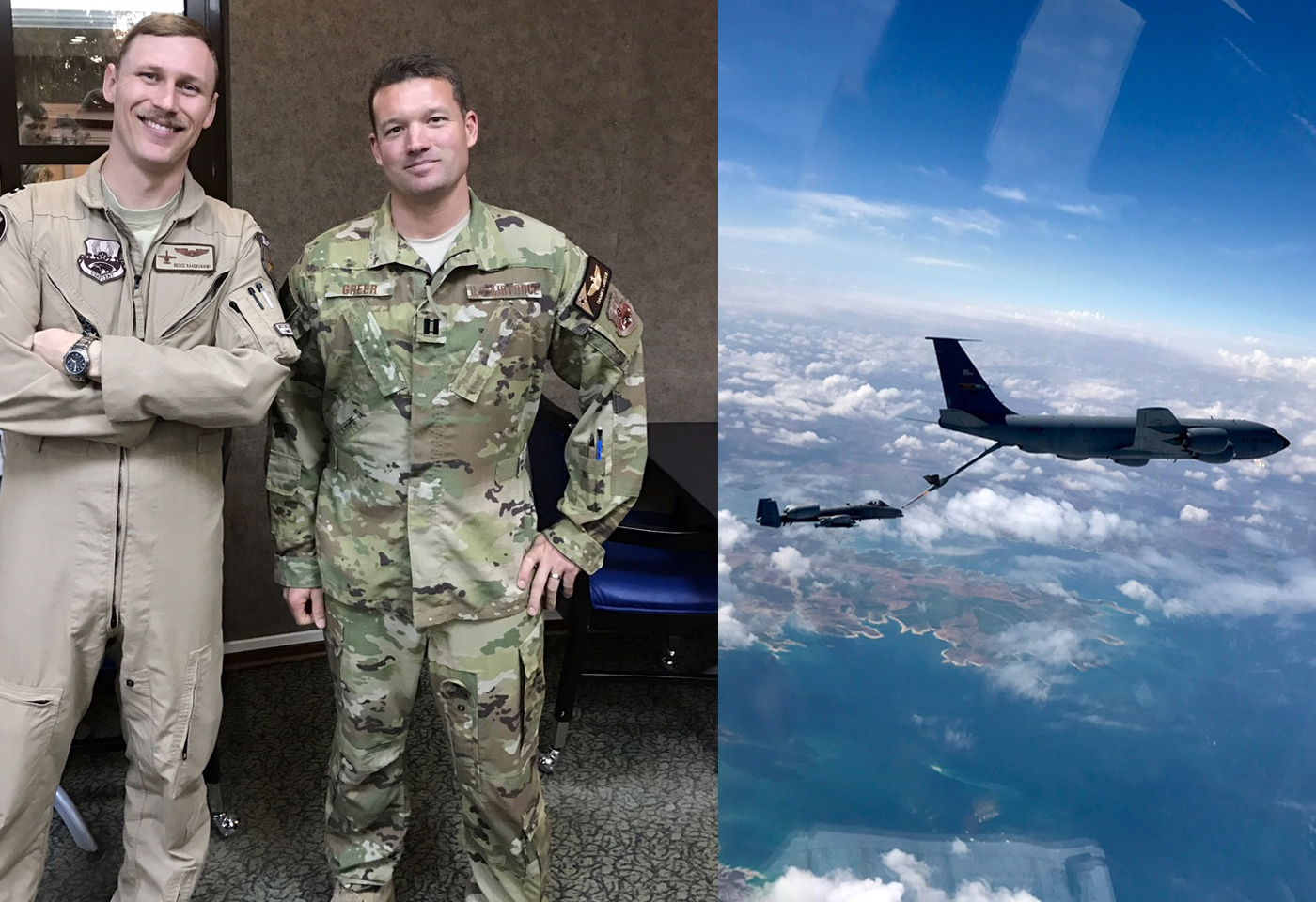 Riverside, Calif. (June 20, 2017) – While serving in the U.S. armed forces, two pilots fighting ISIS in the Middle East crossed paths in the air—literally—and quickly realized they had something else in common; they were California Baptist University Lancers.

“I was thrilled to have a fellow Lancer in the air with me over a combat zone,” said Keli Kaaekuahiwi (2006-08), who was piloting an A-10 Warthog. “It’s very cool knowing that over a combat zone, halfway around the world, there’s a guy who went to the same small—when we were there—Christian school and share the same beliefs.”

Daniel Greer (’06) pilots a KC-135 Stratotanker military aerial refueling aircraft for the Air Force Reserves. Greer was stationed in Turkey this spring, where he and his crew provided air refueling for fighter jets. While refueling Kaaekuahiwi’s jet, the two pilots discovered they were Lancers. A week later, Greer and his team once again refueled Kaaekuahiwi’s fighter jet and a few weeks later the two CBU alumni met in a chow hall at a military base in Turkey.

“We agreed it was pretty cool that two former CBU undergrad students got to do air refueling while flying missions in the war against terror,” Greer said.

Kaaekuahiwi, a captain now stationed in Korea, said flying in the Middle East had its rewards.

“We were constantly flying over specific places that we all remember from the Bible. I could see the ancient ruins of Nineveh, and the Euphrates River,” Kaaekuahiwi said. “It was very rewarding knowing that we were there to save some really good people who are just in a horrible situation.”

Greer, also a captain, has returned to March Air Reserve Base, where he coordinates missions for KC-135 Stratotankers.

After his return, Greer spoke to an aviation class at CBU. He said he is excited to see how CBU has grown, especially the Department of Aviation Science.

“I would encourage all the students to be open what God may have in store for them because it may not have anything to do with what they’re majoring in,” Greer said, noting that he was a college senior before setting his sights on being a pilot in the U. S. Air Force.

“You never know where God is leading you or what He’s going to do,” Greer said.