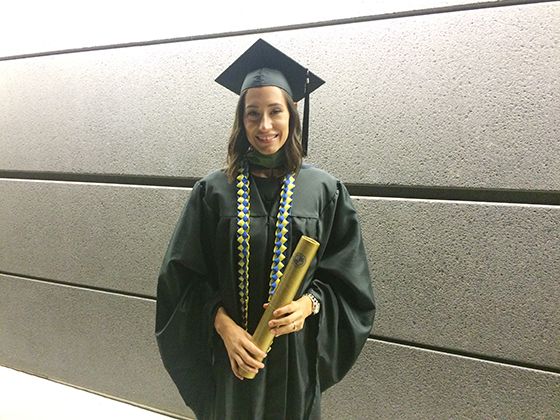 Riverside, Calif. (March 18, 2016) – Daniela Medina ('15) was named one of the 2016 Inspiring Women of Mt. SAC in honor of National Women's History Month. The award given by Mt. San Antonio College is based on a person's character, involvement in community service and personal and academic achievements.

Medina is an athletic trainer at Canyon High School in Anaheim, Calif., and she has been in the U.S. Army Reserves for the past 14 years and served overseas in Kuwait and Iraq. She earned her associate degree from Mt. SAC in 2009, her bachelor's from California State University, Fullerton in 2013 and her master's in athletic training from California Baptist University.

Dr. Jolene Dickert, associate professor of athletic training at CBU, remembers Medina as a compassionate and helpful person. The two of them were part of a CBU team that traveled to East Africa on a Global Engagement trip in June 2014. It was no surprise for Dickert that Medina received the honor for inspiring women.

"It was an amazing experience to see (Medina) evaluate and treat patients in another country while also showing an incredible amount of compassion for each of her patients," Dickert said. "Daniela is an incredible person and professional, and so I am not surprised at all that she has been chosen as an Inspiring Woman of Mt. SAC."

Medina tries to lead by example in the care she shows others in her life.

"I would hope to positively influence my students and be a role model that they would like to emulate, especially when caring for others," she said. "In the military, more than anything, I try to lead by example, and show my interest and concern for my soldiers while working right by their side."