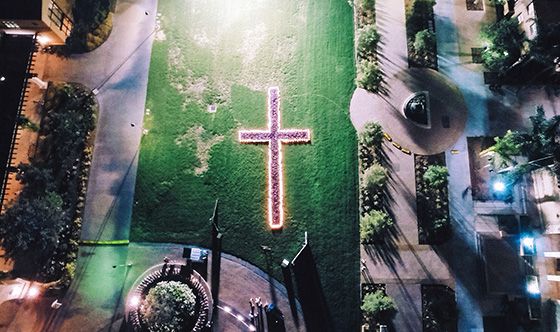 During the day, students, faculty and staff took one of 2,977 flags, one for each victim of the terrorist attack, and placed the flag in the lawn of the Stamps Courtyard. Names of the victims were listed on nearby posters, and each name was on a piece of paper for participants to take with them. The event was sponsored by the Associated Students of California Baptist University.

At the end of the day, all the flags formed a large cross, which was lit at its edges to stand out as the sun set. Findlay used a drone to photograph the scene.

"After hearing about the 9/11 remembrance event and hearing there would be a large cross made up of flags, I immediately thought of capturing the cross from the sky," he said. "I own a drone and this was a perfect opportunity to use it and capture a very unique image."

Trent Ward, ASCBU executive president and a marketing senior, came up with the idea of the event, which is in its inaugural year. He hopes that it becomes a tradition.

"I want us to be a socially responsible student body, a pro-active student body," he said. "This is another opportunity for students to express themselves."

Jason Navarro, a kinesiology senior, placed a flag because he felt it was important to remember everyone who was lost. He was in sixth grade, and although he remembers the events, he did not understand everything that was happening.

"It's important to let us know what we've risen from, how even in the darkest times, there is hope for the future," he said.