Make a Gift Request a Meeting

The Campaign for CBU's College of Engineering 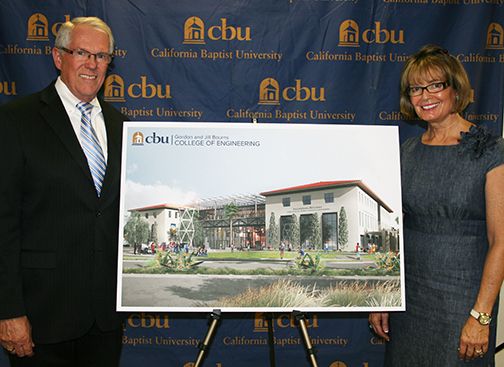 Gordon and Jill Bourns stand next to an architectural drawing for the College of Engineering's new building.

Officials at California Baptist University today announced the naming of the “Gordon and Jill Bourns College of Engineering” in honor of the Riverside couple’s longstanding support for the CBU engineering program.

Dr. Ronald L. Ellis, CBU president, said the naming recognizes the Bourns’ recent $5.5 million lead gift in the college’s “Equipping for Impact” campaign. Ellis said it was the largest single gift from individuals ever received by CBU and provided an auspicious launch for the fundraising campaign.

“I am very grateful to Gordon and Jill for their continuing support of California Baptist University and for this latest example of their wonderful generosity,” Ellis said. “This gift demonstrates their strong commitment to help prepare the engineers of the future and, more than that, it models an amazing spirit of philanthropy that I believe can inspire others to join us in funding this exciting project.”

Gordon Bourns is chairman and CEO of Bourns Inc., a leading manufacturer and supplier of electronic components. He also is chairing the campaign to fund construction of a new building to house the CBU engineering college that now bears his name along with that of his wife.

“We thought this would be a tremendous opportunity to share the blessings God has given us and to inspire others to give also,” Bourns said. “We are thankful for the opportunity to serve the Lord by serving CBU.”

The Bourns’ lead gift in the campaign is the latest demonstration of the couple’s support for the private university’s engineering program. A previous contribution in 2008 was recognized with the naming of the Bourns Engineering Laboratory at CBU.

Campaign proceeds will help fund construction of a planned three-story building encompassing 100,000 square feet of classrooms and state of the art equipment for the Gordon and Jill Bourns College of Engineering. Preliminary plans for the innovative building design will utilize green technology and sustainable construction, and feature two blocks of classroom, faculty and administrative space bracketing a massive engineering hall, providing multipurpose space for labs, projects, exhibits, presentations and student collaboration, as well as an interactive studio for K-12 STEM education.